What are the treatment options for liver cancer?

The treatment for liver cancer depends on the stage, size, and location of the tumours in the liver, whether cirrhosis is present, whether the tumour has spread to other organs. They include the following:

Ablation is performed using local anaesthesia which numbs the area to prevent you from feeling any pain. Ablation can help people who are not candidates for surgery or a liver transplant. It includes the following:

Chemotherapy is done after surgery to destroy any cancer cells that may remain. It is administered through a vein in your arm, in pill form or both. Chemotherapy is used to treat advanced liver cancer, but many people experience side effects during treatment, including vomiting, decreased appetite, and chills. Chemotherapy can also increase your risk of infection.

Radiation therapy uses high energy beams from X-rays and protons that kill cancer cells. It is delivered by external beam radiation or by internal radiation.

Immunotherapy treatments are reserved only for people with advanced liver cancers, recurrent cancer and cancers that have spread to other parts of the body. To know more about immunotherapy you can read this article.

Embolization is the procedure that injects substances directly into an artery in the liver, to block or reduce the blood flow to a tumour in the liver. Embolization is an option for some patients who have tumours that cannot be removed by surgery. They are done to block the hepatic artery and this can also be used with ablation. Embolization can reduce some of the blood supply to the normal liver tissue, so it may not be a good option for hepatitis or cirrhosis patients.

Palliative care is specialized medical care focusing on providing relief from pain and other symptoms of a serious illness. Palliative therapy helps to manage symptoms caused by liver cancer but is not meant to cure it. Palliative care is used while undergoing other aggressive treatments, such as surgery, chemotherapy or radiation therapy. The palliative care team try to control the pain levels and provide treatments that focus on the quality of life.

What is the outlook of Liver Cancer?

“Increase your sense of well-being after cancer treatment. Discover a new personal strength and look after yourself by doing some physical activities. Keep your body and mind healthy!”

Follow-up care is one thing you would have to go for, once you are done with your liver cancer treatment. This will ensure that there are no recurrences or secondary cancers. This will also help you manage any long-term or delayed side effects efficiently. Life is going to change after getting diagnosed with liver cancer. For all you may know, it may not even be possible to get completely cured of liver cancer. The liver cancer treatment may help you relieve your symptoms and control the growth of those cancer cells. However, with the right mindset, proper medication and a few lifestyle changes you can have a better quality of life.

How can you prepare yourself for the treatment of Liver cancer?

The checklist given below will help you in planning your treatment in India: 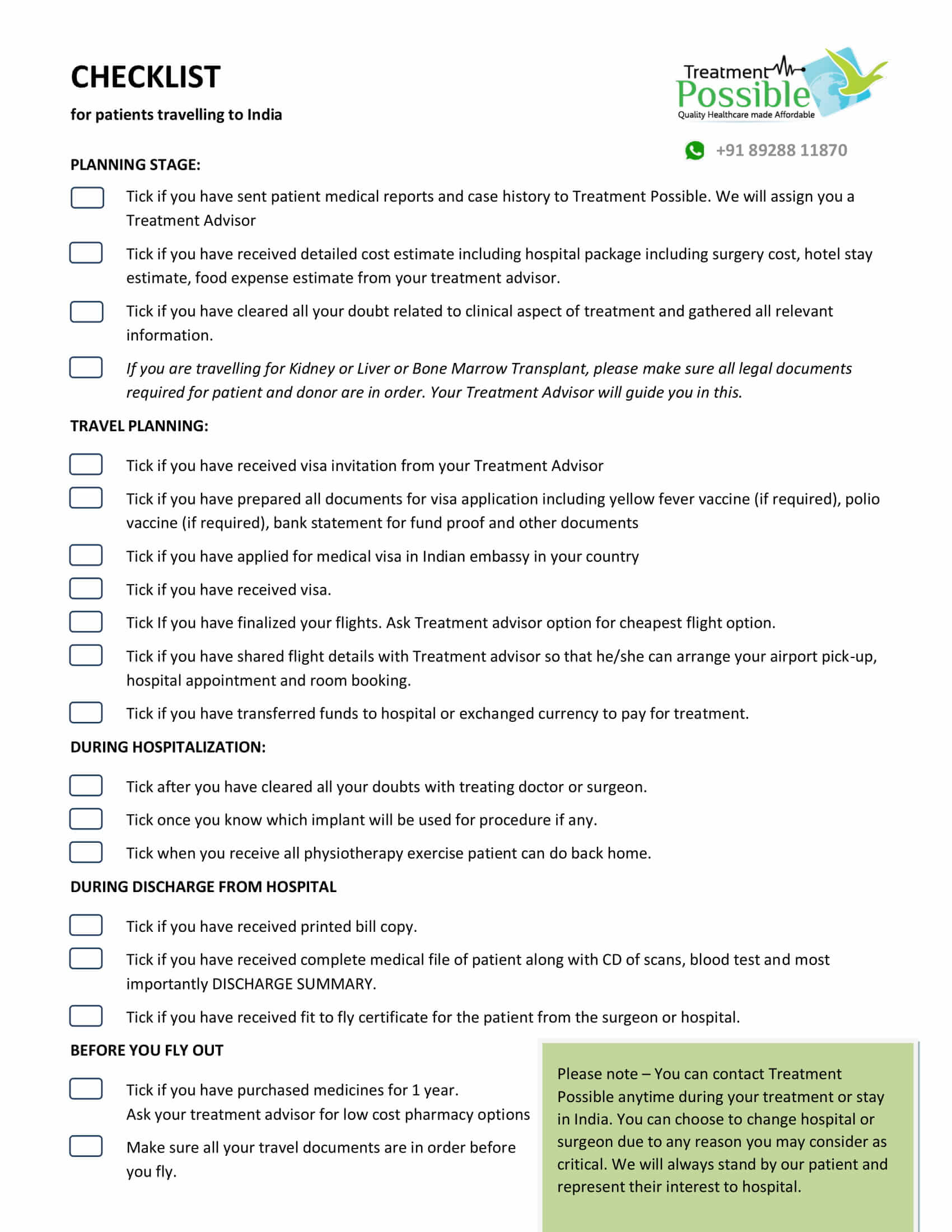 What is the cost of liver cancer treatment in India?

The cost of treatment of liver cancer starts from $6000 but may vary as the treatment plan is different for each patient depending on their condition & stage of cancer they are diagnosed with.

The table below gives detailed info about the cost of liver cancer treatment in India:

What about accommodation services during your stay in India?

If you still do not prefer service apartments then we also help you in finding suitable and affordable hotels that are within a kilometre of the hospital. The average cost of a hotel suite including lunch and dinner will be around $75 per day. If you want to undergo treatment in India you can contact us at our Email: [email protected] or Whatsapp Us.

Want to book a service apartment?

We will provide you with the best possible service apartments that meet your requirement.
Book Now

Liver cancer may spread quickly depending on the type of cancer. Hemangiosarcoma and angiosarcoma are fast-spreading cancer, whereas hepatocellular carcinoma spreads late in the disease.

What is the survival rate of liver cancer?

Does your stomach swell with liver cancer?

Can liver cancer be detected in ultrasound?

Ultrasound is often the first test used to examine the liver. Sound waves are used to create an image on a computer screen. This test can show tumours that grow in the liver, which can later be tested for cancer (if required).

How many stages of liver cancer are there?

How long can a person live with liver cancer without knowing it?

Liver cancers can form and grow undetected for 3 years without any obvious signs or symptoms.

Why should you choose India for your treatment?